Demon Slayer is undoubtedly one of the hottest shonen manga and anime series of our time. Ever since the Entertainment District arc, fans noticed Tanjiro’s performance and have discussed some of the toughest fights he’s been in.

Disclaimer: This article contains major spoilers from the series.

Demon Slayer: Ranking some of the toughest fights that involved Tanjiro

This fight was showcased during the first season of the series. Tanjiro, along with Zenitsu and Inosuke were up against the spider demons on Mount Nagatumo. Inosuke and Tanjiro were up against the Mother Spider Demon, who used her webs as strings to manipulate the dead bodies of demon hunters.

This was a relatively difficult fight and Tanjiro managed to kill her in the end, all thanks to Inosuke’s Beast Breathing: Spatial Awareness, which accurately pointed out her location.

Tanjiro and the rest were on the Mugen Train in order to investigate the case of missing people on the train. Tanjiro struggled psychologically since he was made to dream about his family, which kept him occupied for a while.

In order to wake up, he had to kill himself in the dream, which would have taken a toll on his mental health. However, with the help of Rengoku and Inosuke, he was able to defeat Enmu during the Mugen Train bow.

Hope you liked the battle with the spider dad on #DemonSlayer tonight! Every monster sound you heard came from my gullet, no matter how inhuman it sounded. It was what we call a “throat ripper session.” But it was worth it for you guys!

Hope you liked the battle with the spider dad on #DemonSlayer tonight! Every monster sound you heard came from my gullet, no matter how inhuman it sounded. It was what we call a “throat ripper session.” But it was worth it for you guys! (And don’t worry, throat recovered well.) https://t.co/0QcP6t30gH

This fight was extremely difficult and both the demon hunters were struggling against the Father Spider Demon. Inosuke and Tanjiro teamed up against him, but they were unable to cut through his neck.

The demon’s raw power and durability was quite high. In the end, Giyu Tomioka was sent as reinforcement and he saved Inosuke from dying to the Spider Demon. Tanjiro barely managed to inflict damage on this demon and he was flung into another part of the mountain. 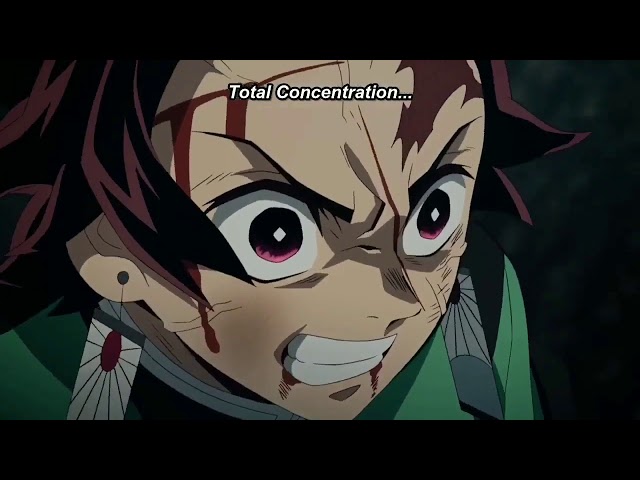 The fight against Rui was one of the most hyped in the first season of Demon Slayer. He was fighting against the Lower Moon demon and even had Nezuko assisting him. It was in this fight when Nezuko used her Blood Demon Art and Tanjiro used the Hinokami Kagura.

However the latter couldn’t cut through Rui’s neck and he too was saved by Giyu Tomioka, who used the eleventh form of Water Breathing to defeat the Lower Moon demon.

Members of the Demon Slayer Corps made their way to Yoshiwara District and fought against the Upper Moon 6, Daki and Gyutaro. The demon hunters struggled quite a lot to keep up with Gyutaro and his Blood Demon Art.

However, against all odds, Tanjiro along with the rest of his crew were able to defeat the Upper Moon 6. This was also the first time he activated his Demon Slayer Mark as well.

Fans absolutely loved this fight in the Entertainment District bow. Most of them would have died in the end if not for Nezuko’s Blood Demon Art that burned the poison from their body.

The battle against Hantengu was long and hard. However, this demon had multiple clones that had unique abilities. The fight was quite hard and the members of the Demon Slayer Corps had to split up and fight them. Tanjiro and Genya teamed up and gave their best.

That being said, the demon hunters prevailed and beat the Upper Moon 4 demon and Mitsuri was pushed to a point where she had to activate her Demon Slayer Mark.

Giyu and Tanjiro fought against Akaza during the last arc of the series. This was a tough fight and it was quite surprising to see them alive at the end of it. Akaza was so strong that he was able to keep both Giyu and Tanjiro at bay despite activating their Demon Slayer Marks.

In the end, Akaza killed himself because he wanted to reunite with his fiance. Things would have gone south quite quickly if he didn’t do so.

Every single Hashira other than Giyu and Sanemi died in the series. Most of them died to Muzan and it took the entire Demon Slayer Corps as well as Tamayo’s medicines to kill him in the end. Tanjiro gave his best and he too died during this fight.

However, Muzan injected all of his blood into Tanjiro moments before dying in the hopes that the latter would be able to fulfill his goal. Tanjiro turned into a demon that conquered the sun. Luckily, Kanao injected him with Shinobu’s medicine which turned him back to a human.

SK Anime is now on Twitter & Facebook with updates on your favorite shows & manga, all in one place!